The Appeal of Nekomimi and How Its Implementation Can Boost Vesterian Charts (We Need Em!)

The appeal of “nekomimi” (which will now be referred to as “cat-girl” for shorthand usage) in modern day Japanese media is fairly extensive. One could say that it is a trait to be sought for on its own when in the process of creating a memorable character. On July 24th of 2019, berezaa, Creative Director of Vesteria, had said (what will be assumed to be a joke) that the implementation of “cat girls” will become a reality. We are going to expand on this reality and examine some possibilities that would stem from this addition and the benefits that could occur.

The definition of “nekomimi” translates to the literal “cat-ear(s)” in the Japanese language. This generally consists of a [female] character adorned with cat-like characteristics. The most notable of these can be the ears of a cat, the tail, and more-so the qualities of the animal (playfulness, laziness, etc.) They are mostly noted for their appearances in several Japanese media, such as anime and manga.

The history of the idea around the character design can be dated back as early as to 1924, where author Kenji Miyazawa had published “水仙月の四日” (The 4th of Narcissus Month), involving a “beautiful, cat-eared woman.” The first anime involving characters with these traits was “The King’s Tail,” created in 1949. Characters such as Catwoman and Cheetah from the well-known DC Comics can also be considered under the label of nekomimi. Later on in 1978, the design took of when an anime titled “The Star Of Cottonland” had released, receiving great attention for the inclusion of a cat-girl. [1] The title had received the Kodansha Manga Award for shojo manga in the same year, and in 1979 “was the most popular series running in LaLa.” [2]

Acchi Kocchi, a well-known anime involving the appearance of a catgirl.

Nekomimi, shorthanded as “cat-girl”, revolves around the appeal to an audience that enjoys character archetypes revolving around the qualities of a cat. Catgirls in media are usually appealing to “moe” characteristics, targeting the affectionate spots in a viewer’s heart. Most common archetypes surrounding catgirls are what we will define as different types succeeded by a letter. A Type A catgirl refers to ones that behave closer to their primal instincts, most being similar. An example of these would be the characters from the popular Nekopara series.

These characters usually act in a more innocent/explicit way when exposed to the reality of “our world”. Often they may call humans by their species names (prominent with Hanekawa Tsubasa - Black from the Nisemonogatari series.) They may be unfamiliar to the customs of human tradition and society, and this comes with the background of being primarily born a cat from the beginning and having retained those instincts (usually by author choice.) We then move on to what we define a Type B catgirl, one housing the aesthetics of a traditional catgirl while retaining the personality and general mentality of a human. However, this does not mean that they only house the aesthetic side. Catgirls in particular of a character may frequently end their sentences with the Japanese depiction of a “meow”, in onomatopoetic form would be “nya”. They may also frequently curl their hands in depiction of a cat, or have Japanese depictions of a catlike face. 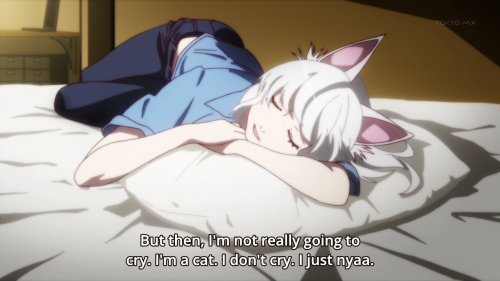 Nekomonogatari, where the catgirl appearance of Tsubasa is spiritually aware of their species, and retains human-like thought.

The appearance and behavior of catgirls in Japanese media achieve a moe factor of playfulness and innocent behavior. These characteristics in character are what bring the catgirl archetype to the stage; the feeling of affection towards a character who’s mentality can be roughly compared to a cat’s is what drives the success of the moe factor within a catgirl.

Since the dawn of the catgirl, many media producers have sought to take an advantage in this somewhat peculiar design of a character and make extraordinary productions stemming from it. A widely known example is the famous basic visual novel, Nekopara. 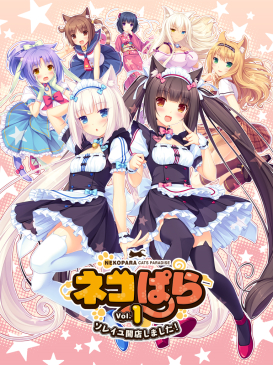 Nekopara is a visual novel game that revolves around the player living in a world where the existence of catgirls is made commonplace alongside humans. The novel has a single story, and the player is unable to influence the outcome of what is to be said and done. Nekopara received an anime adaption that was released on Steam in December 2017, where it became one of the top earning pieces of media available [3].

Nekopara’s initial releases were in 2014 on the platform Steam withuncensoredandcensoredversions which marked its debut as a series. Volume 0, prequel to 1 would go on to release in 2015, Volume 2 in 2016, Volume 3 in 2017, and extra content was released in 2018 and prior. One particular piece of information is the OVA installment in the series.

Nekopara announced that an OVA would be produced if they were able to reach $100,000 of funding for the episode. They were not only able to reach that goal, but they exceeded that goal by an extreme 9 times the original goal! [4]

Quite clearly, the series was able to raise well enough over their intended goal and went on to create Nekopara Extra in 2018 as well. With the theme so heavily focused around the moe appeal of catgirl behavior and a wide assortment of character personalities to encounter, Nekopara was able to garner the attention of many viewers, more ever so willing to raise a great amount of money to produce extra content for their satisfaction.

In reference to the original message of berezaa stating that catgirls would become a feature ingame, the term and concept have ever since then been used as a recurring, inside joke within the Vesterian community. The term cat maid has been said a total of 107 times within the community Discord, and the term cat girl has been said a total of 119 times at the time of publication.

Although a joke, berezaa has once referenced an idea that would suggest the implementation of “cat maids” in Vesteria.

The majority of the player Vesteria community has indulged in watching some form of Japanese media; “anime” or “manga” one may call it. The concept of anime hovering around the community is not generally a negative one; slightly leaning towards a positive and neutral take on the topic of these related medias. The word anime has been said over 9,000 times in the community Discord at the time of publication. From this, we can infer that the general population of Vesteria would be willing to (if not fully compliant) be open to try the implementation of a catgirl race / additional aesthetic.

On the platform ROBLOX, there are many things relating to or being inspired from anime. The most instant example are front-page games that feature an anime and characters with corresponding abilities (albeit being low-quality.)

Apart from game development’s relation to anime on ROBLOX, there are also the adaptions of common anime accessories that have been created by UGC creators, a recently introduced program allowing members of the ROBLOX communty who are proficient in creation and shipping of 3D hat models to sell their work as official ROBLOX accessories on the catalog for a profit.

Sales statistics as of 11:35 PM EST, 3/10/20
it is to note this is not complete data regarding a fixed set. do not take this seriously.

Some anime-relevant items were compared with cheaper counterparts that were all released within 2 months of eachother’s releases. As we can see, with the introduction of UGC as well as the release of anime-related accessories, they can perform significantly greater than regular accessories as the audience seeks for such.

Vesteria’s implementation of catgirls can tap into this potential market of otakus and the general anime audience to further increase profits. An example would be a character customization gamepass with the ability to add on certain accessories to your character, including the cat ears. With the anime population of Vesteria at a high combined with the ability to show off the accessories to other ingame players (who may be curious of how to obtain a pair), developers could benefit greatly from such a tactic aimed at the specific audience of Vesteria. The way it is worded here may sound exploitative, however- it is simply turning a well sought joke into reality for more enjoyment among the population of Vesteria.

With the recurring joke popular enough in Vesteria, outside successes and inside successes appealing towards the anime-oriented community of ROBLOX, the implementation of cat ears in Vesteria only has positive benefits to be offered and displayed within the community.

alright, off to bed.

Why I just spent 10 minutes reading this post, I will never know why.

ok I know this is a shitpost but I really don’t like the idea, amazing effort but I hate it.

yep
this is a high-effort shitpost, i would not (unironically) want cat ears in vesteria either

Much needed feature, the addition of cat girls would finally (probably) get me a girlfriend. It also adds further appeal to megukoo

I feel legally obligated to revoke your permit to converse in any sort of media.

Wikipedia:Wikipedia is not a reliable source

Wikipedia is not a reliable source. Wikipedia can be edited by anyone at any time. This means that any information it contains at any particular time could be vandalism, a work in progress, or just plain wrong. Biographies of living persons, subjects that happen to be in the news, and politically or culturally contentious topics are especially vulnerable to these issues. Edits on Wikipedia that are in error may eventually be fixed. However, because Wikipedia is a volunteer-run project, it cannot ...

This the most dedicated sh- crappost ive ever seen. I am fully in support of this.

So basically faunus in vesteria, nice!

plus do you think literally any other site has a detailed enough history with the search term “catgirl?”
they all quoted wikipedia

If this is added as a race/optional cosmetic, I will start using killaura and aimbot to hunt down and brutally and coldheartedly murder anyone who uses it.

Oh my God this is so long I’m dying.

This deserves a thumbs up.

Well Then Friend, You’d Be Smiting Me