If you were unaware, the developers have been talking about a new equipment type that goes into your weapon offhand slot: Amulets. 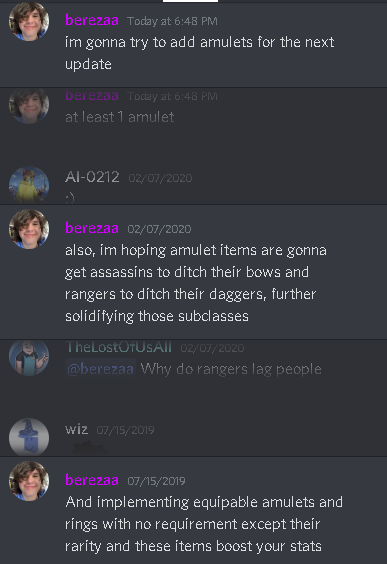 They would give you special perks and bonuses. I had a couple of ideas for amulet perks, and decided to list them all here! These aren’t supposed to be balanced. Take my ideas with a grain of salt, and realize that they would be adjusted if any of them did get into the game.

Amulet of light healing
A simple amulet made of silver, with a trim of gold surrounding the ruby in the middle.
These fascinating trinkets were supposedly worn by vampire hunters of old who were known to use vampire blood in order to fuel their magic. There might still be some left in this amulet…
Attacks have a chance to drain health from opponents.
+30 Vitality, -8 strength

Deathsting necklace
A disgusting necklace strung out of the impaler’s carcass. It reeks of a disgusting smell.
Normal enemies will prioritize attacking you less over other players, and any crustacean mobs will ignore you entirely. Crustacean or scorpion themed weapons gain a damage bonus while this amulet is equipped.

Bluesteel Pendant
A magical pendant made out of a rare material normally used in the creation of secure chests so that thieves cannot lockpick them open. Maybe try using a key some day?
Grants the ability to destroy chests after you open them. Destroying chests can add stacking greed buff onto the pendant, or summon a chest mimic which will fight you.
+25% Greed, -5% HP per stack. Caps out at 5 stacks.

I have not made any amulet concepts for the other classes, so have some hunter subclass-specific ones. Stats and effects would be subject to change.

HUNTER SUBCLASS AMULETS
these wouldn’t be the only hunter-exclusive amulets clown!

Monster Tooth Necklace
A necklace made from a great ocean monster’s tooth. Some rangers venture out into the sea, and honor their traditions by slaying these terrifying creatures.
Ranger’s stance is replaced with a new ability known as beastslayer stance. This variation of ranger stance requires that you hold the bowstring for an incredibly long period of time without getting hit. Once the arrow is ready, it fires a powerful ballista shot.
+45 strength, - 20 dexterity

Manipulator’s Coif
A coif covered in decorative patterns with a mysterious enchantment. Is it a curse or a blessing?
Switch strike causes enemies to become confused, and attack their allies for a short period. If the attack instead kills them, one of three effects occurs: You gain 3s of invisibility, you gain a damage bonus in exchange for halved defense, or the mob comes back from the dead revived as a terulian avatar with increased stats to hunt you down and kill you. If you prove your strength and kill this terulian avatar, gain the damage bonus mentioned previously.
+15 Intelligence, -10% to all other stats

Dark Tongue
An amulet that was found in a necromancer’s lair. Wearing it makes you want to go as fast as you can, as if something inside of you is tearing into you, forcing you to.
While you are walking, you have -50% health regeneration and take 10% more damage from all sources. When you are sprinting, shunpo gains a reduced cooldown and refreshes its cooldown upon kill. Going invisible will counter-act the negative effects when you are walking.

Dark tongue seems to be the most underpowered to be completely honest.

There was a david leak of an amulet

Ok, cool and all but why is the text so hard to read?

also where are the hallowed, crimson, jungle, and corruption mimics sir
you forgot the big boys

I assume the writer wanted to make the effect of ‘headers’ in his post so he made the headers large and to make the words underneath smaller than that, he used <small.>. Just what I think.

Good ideas, but the bluesteel pendant seems op. I mean, as soon as you get this, you go back to the 100+ previously opened chests, get a stacking greed bonus, and then beetles for days.

I agree, the Bluesteel Pendant is OP. +125% Greed at the cost of -25% HP? Combined with Pirate Hat (+9% Greed if I remember correctly - found in Golden Chest in Shiprock Bottom) and Greedy Boots (+2% Greed if I remember correctly - found in Bluesteel Chest in Lost Corridor), that’s a total of +136% Greed - more than double mushcoin! Considering that many mobs can drop in excess of 100 Bronze each, and can be farmed en masse, that is super OP. Also, this would just break Rangers even more (I am a Ranger main, but even I have limits on how broken I want to be), considering that right now if they get hit they’re probably gonna die anyway, they don’t have much HP either way.