Note:
This is just me wasting my time in a tester chat about 2 weeks ago, there’s a bit to read through, so yeah good luck with that one. 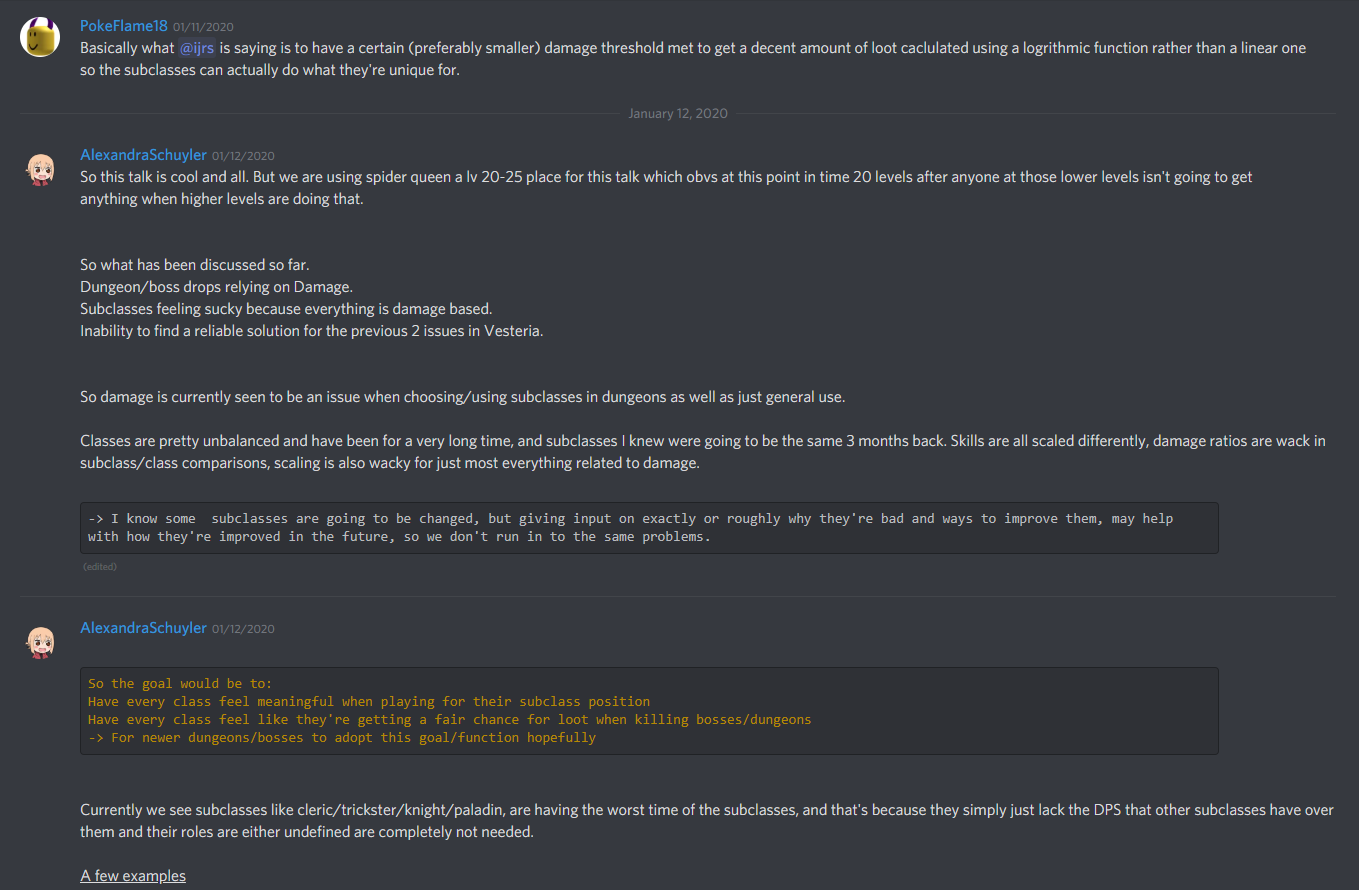 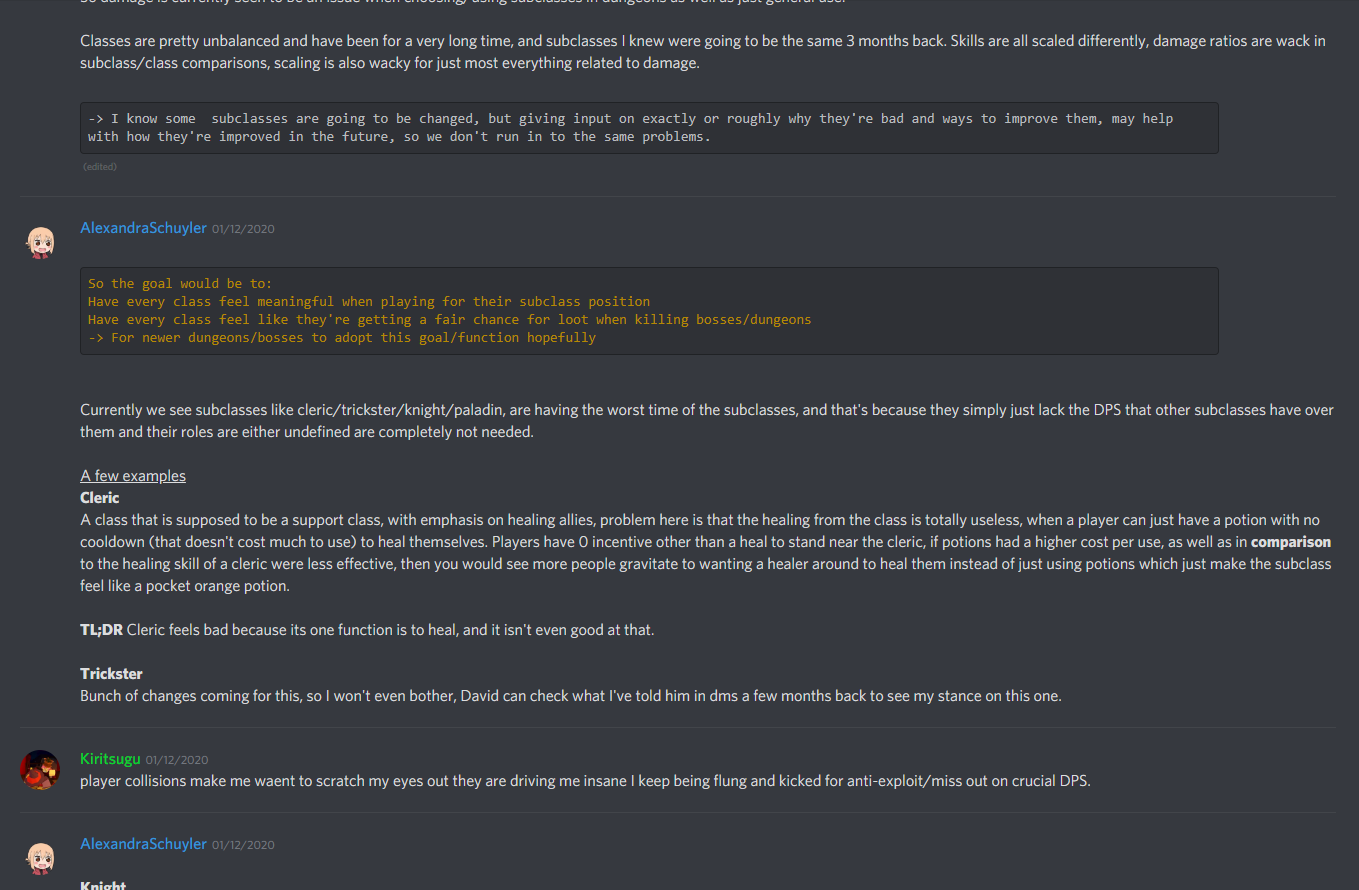 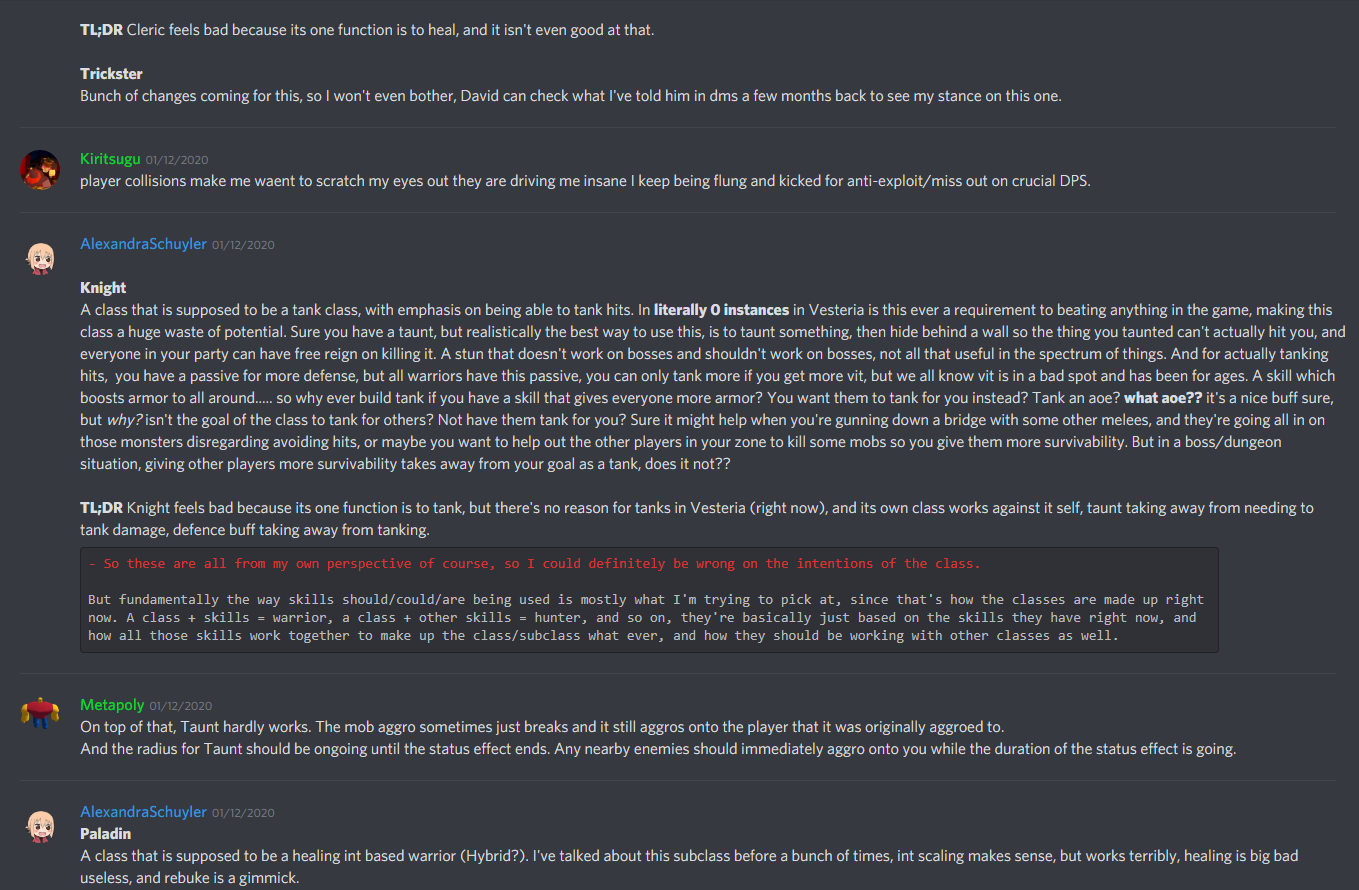 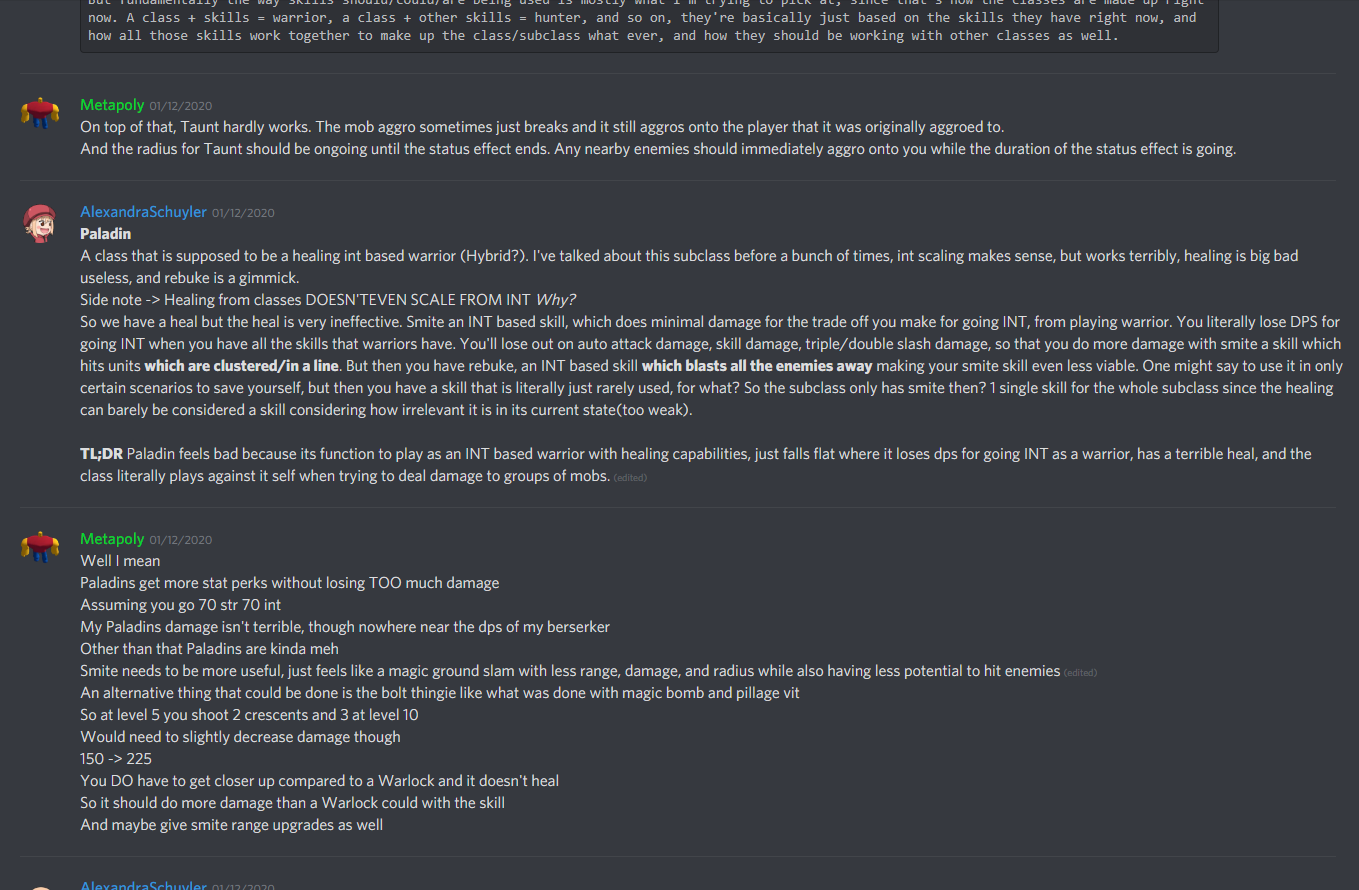 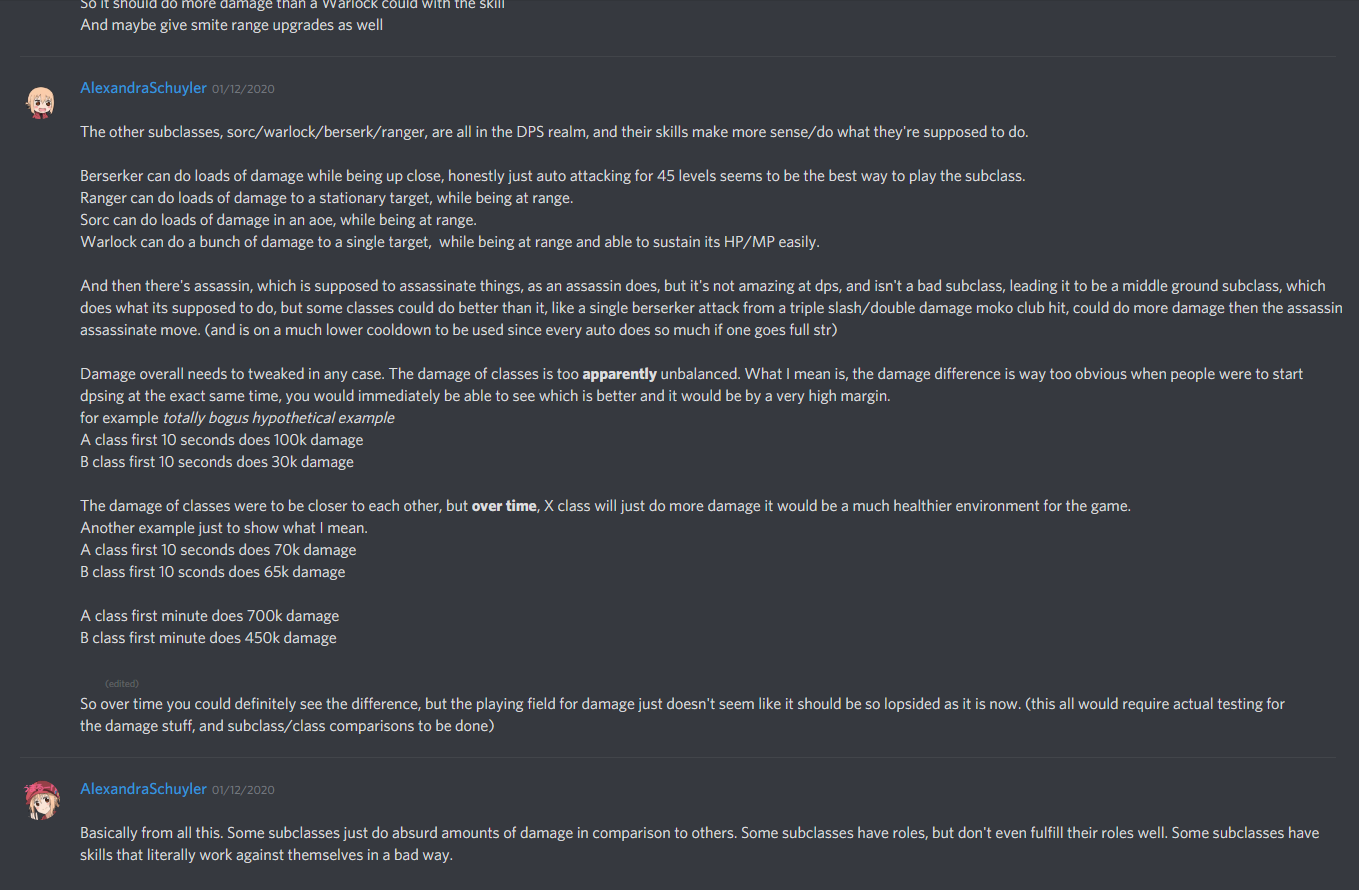 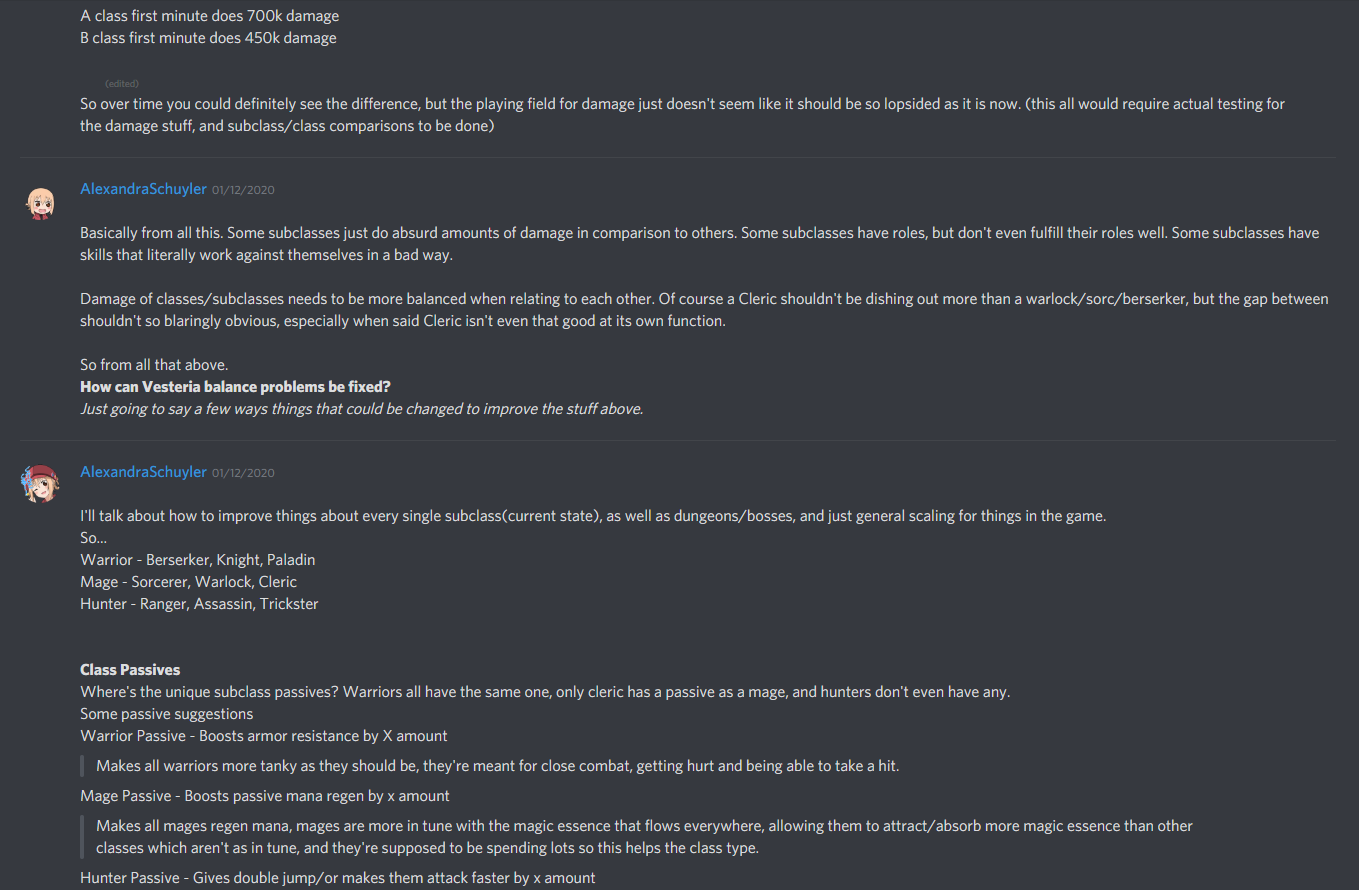 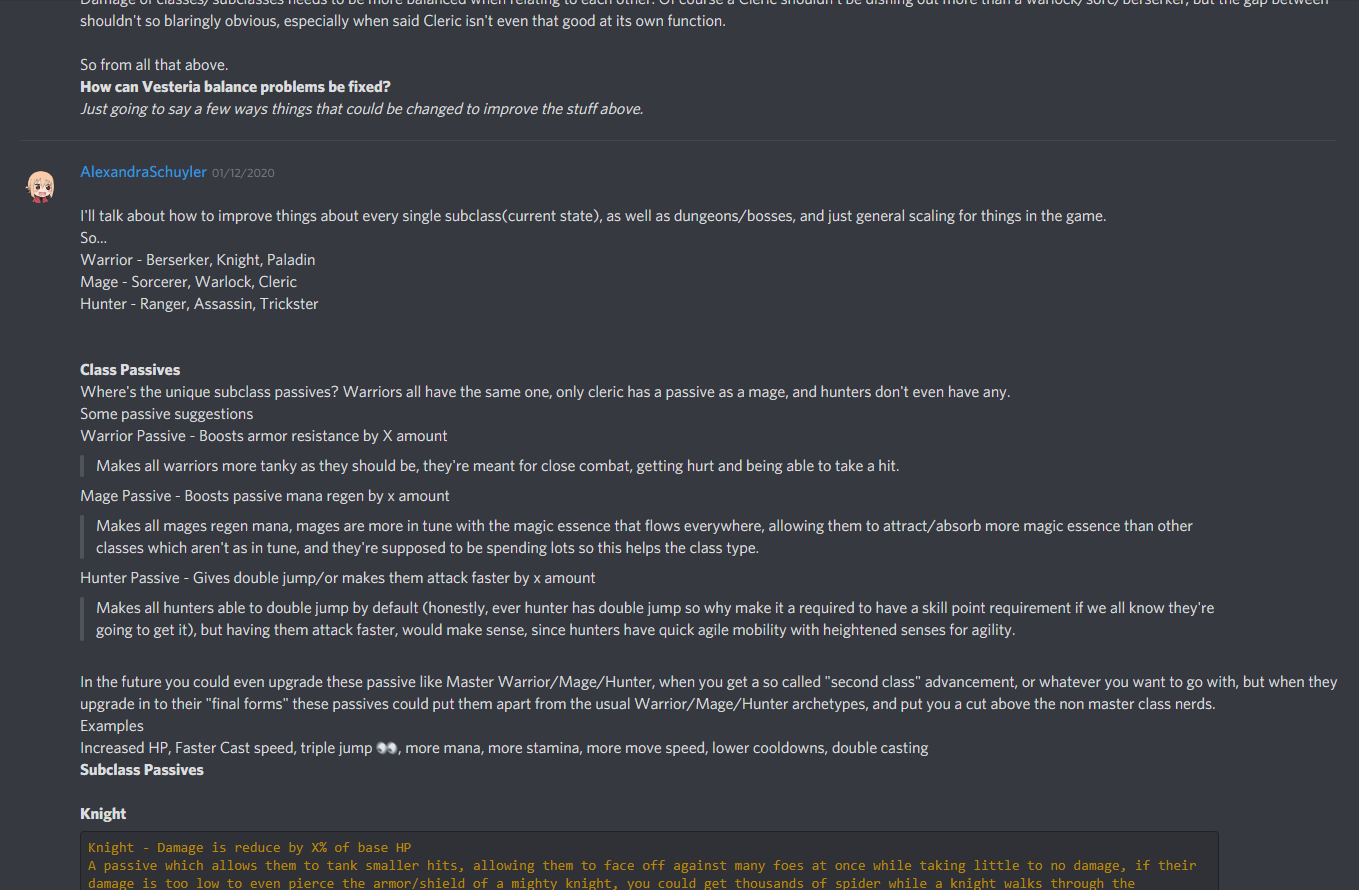 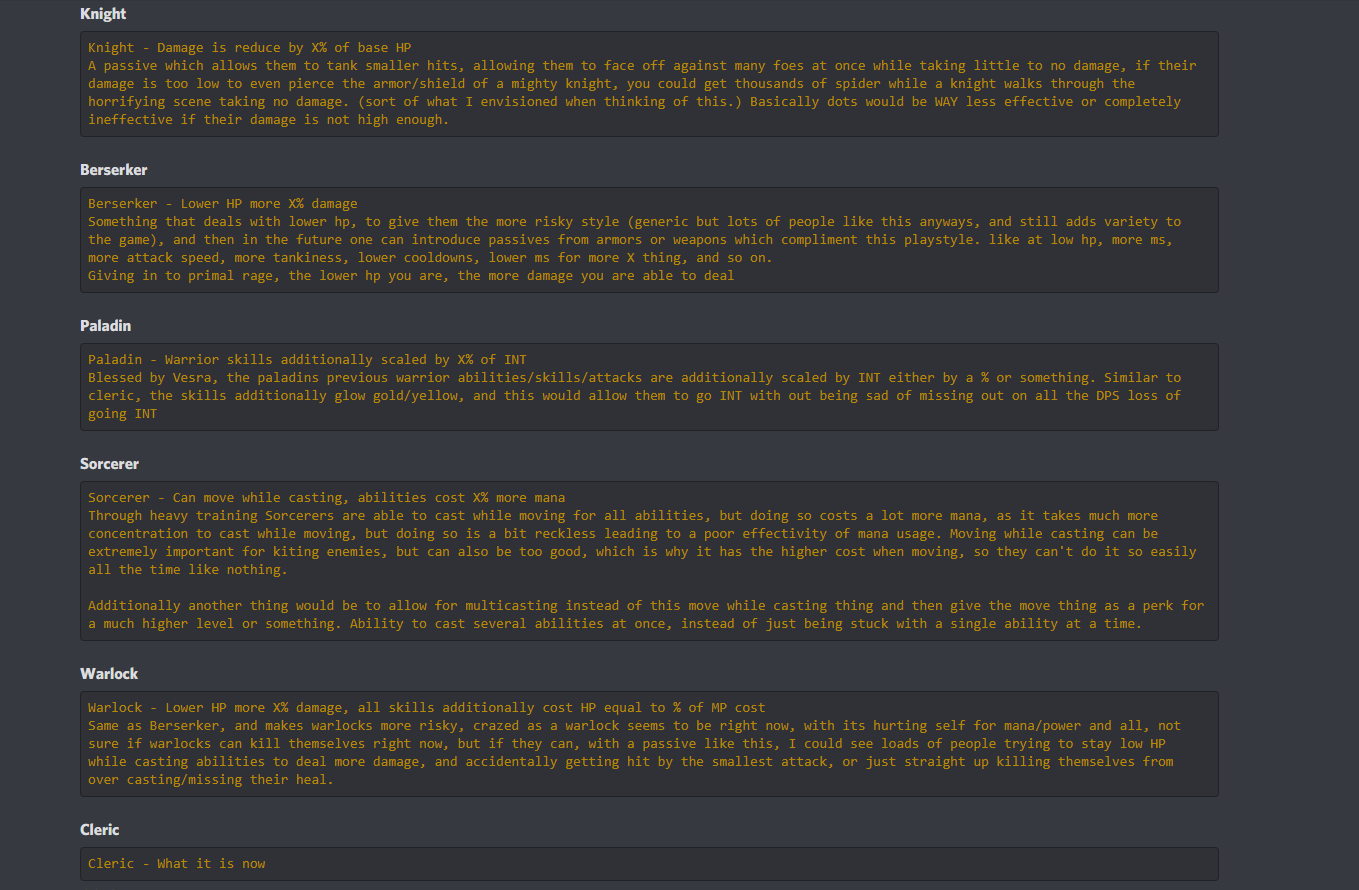 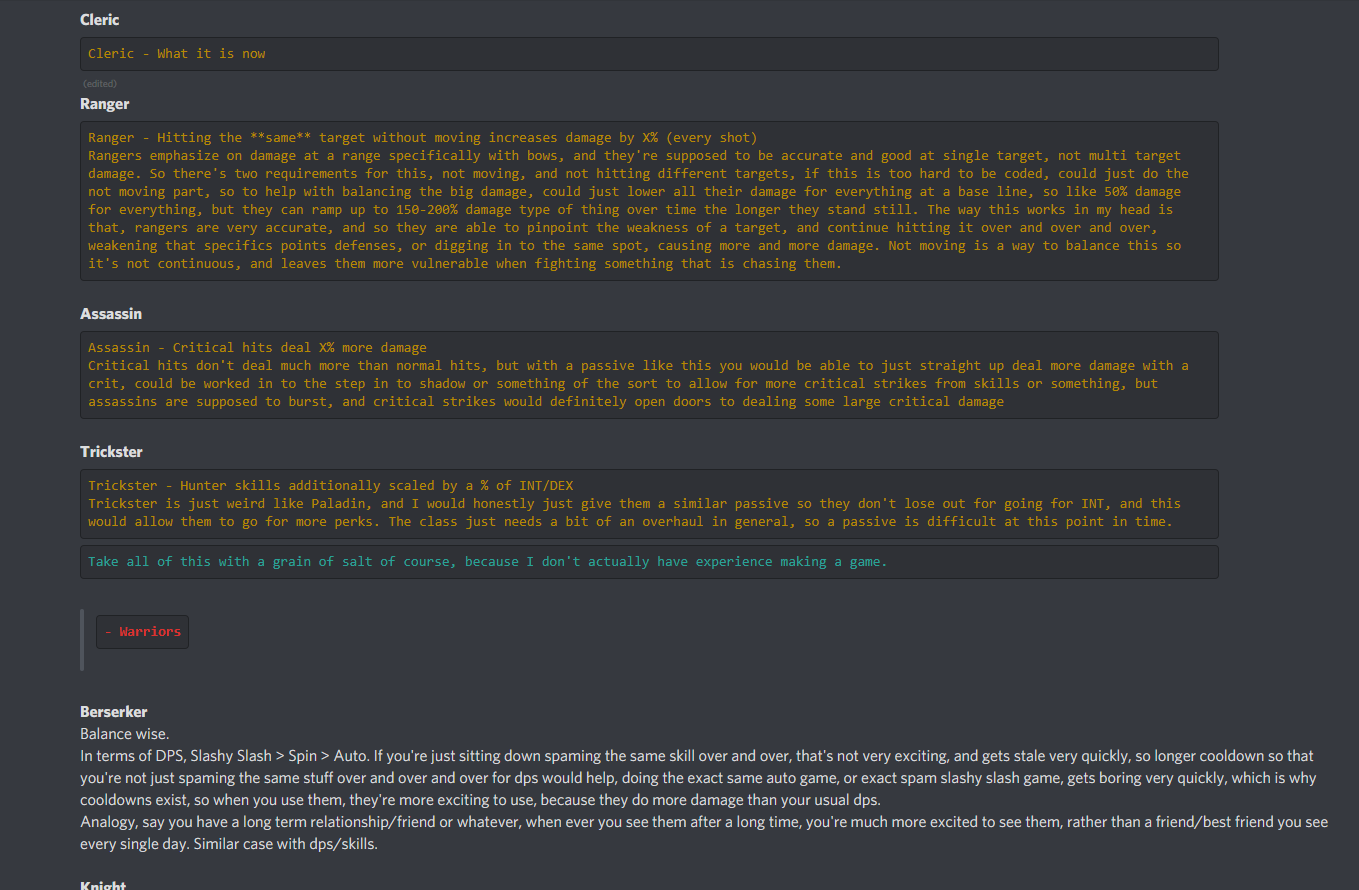 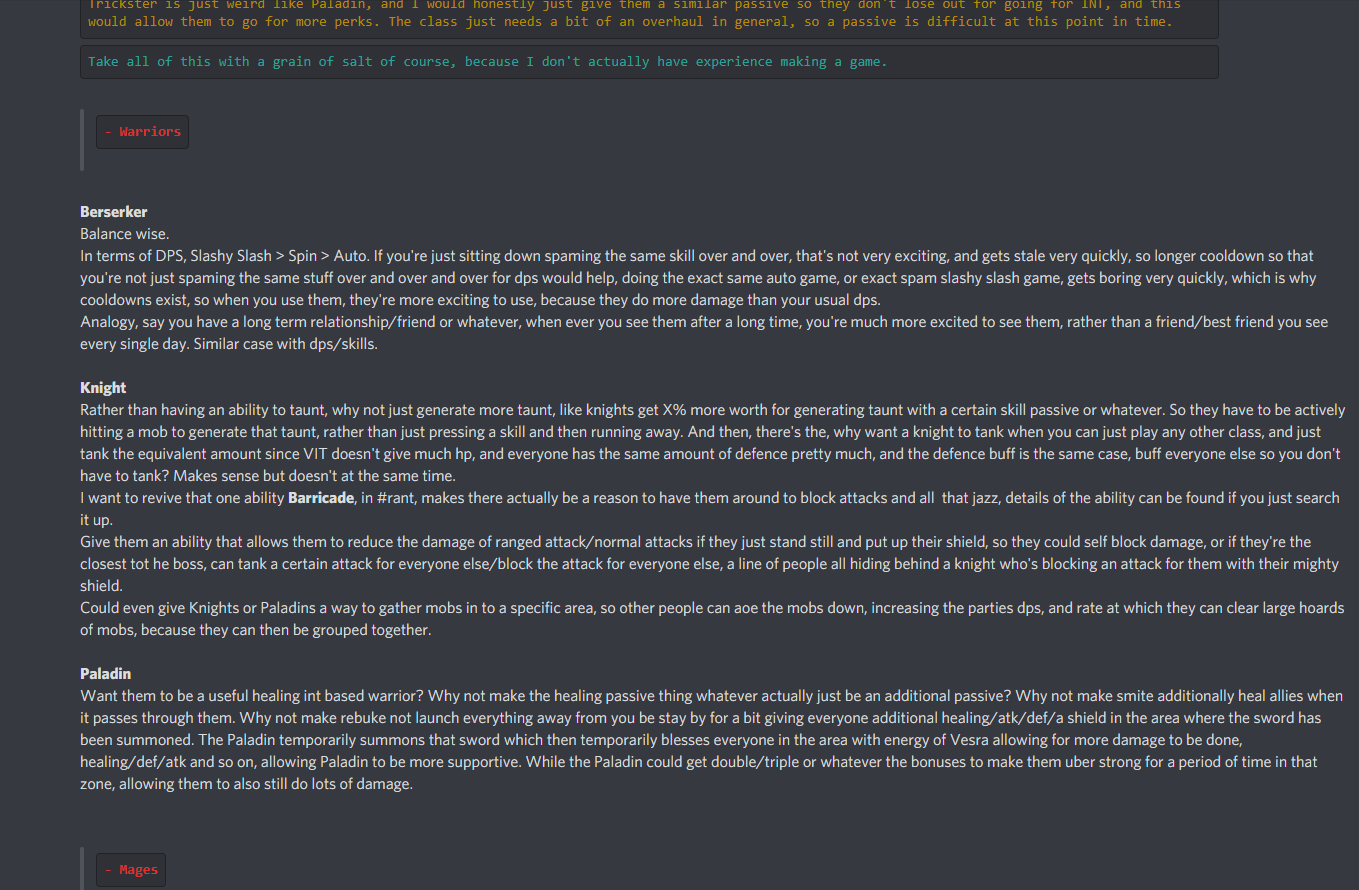 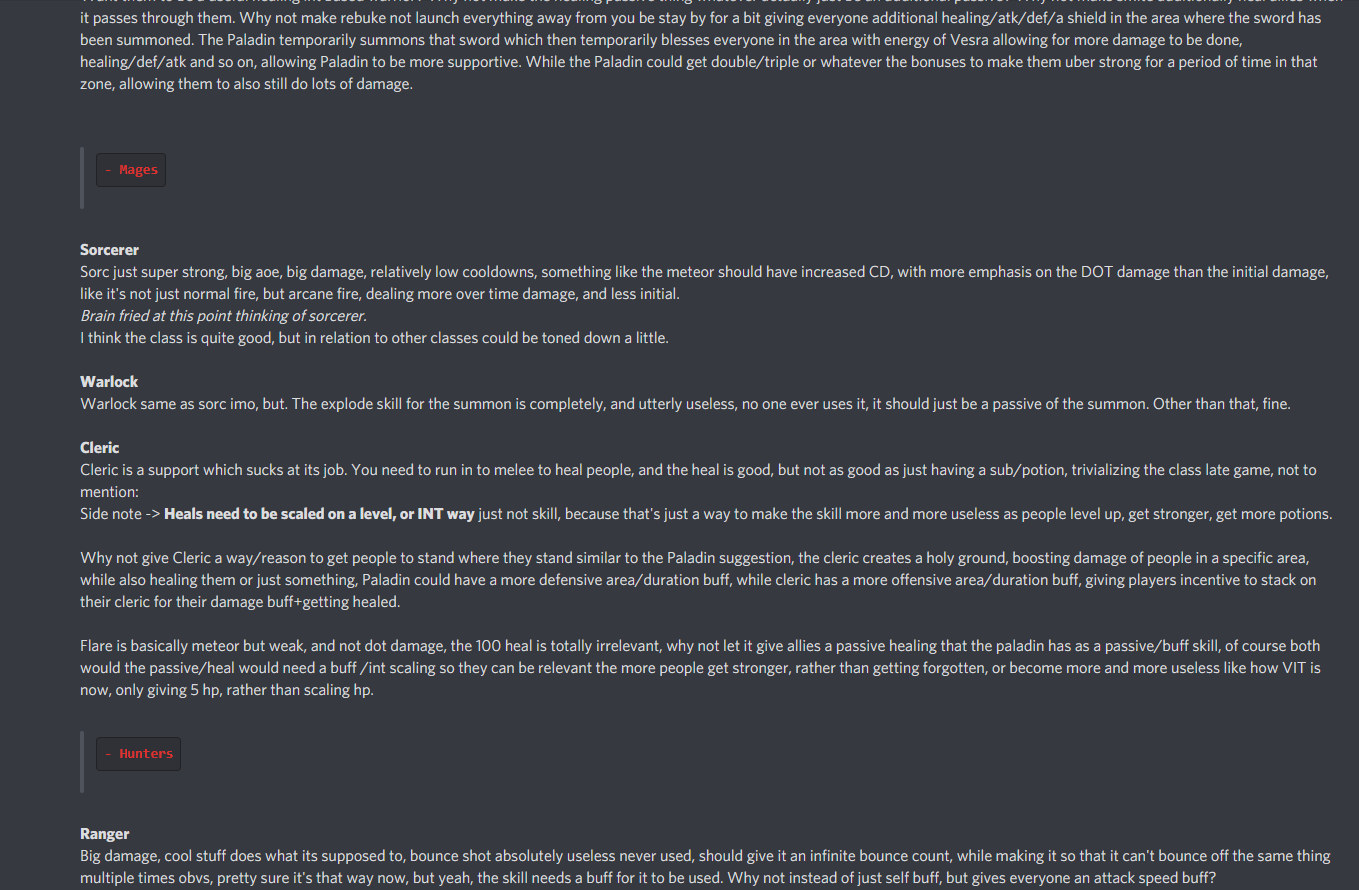 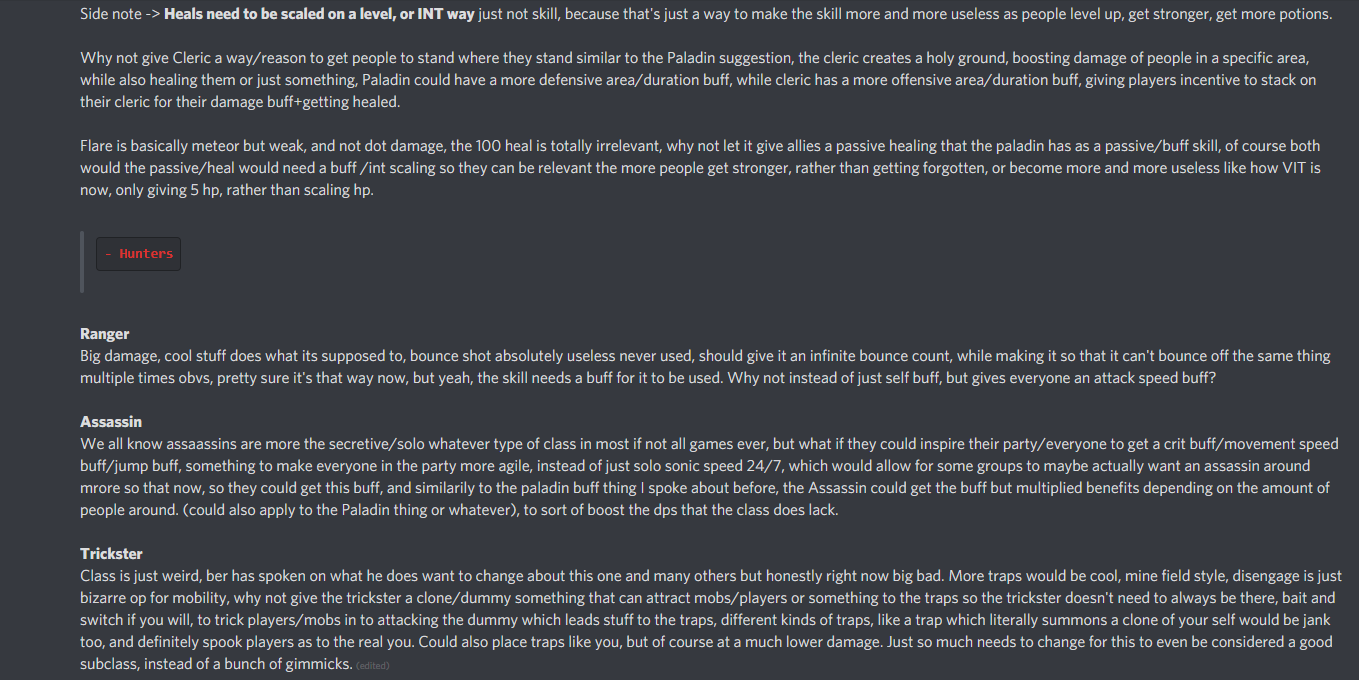 1yWMUHUeTYc2bcZVOvWtLE0ngY2odOuIEZrHPRlZR6EtdsSnKnt0XjWTcF3kQLqasNm5e3crqDAzGza6BM8E-XGXKEtCRynIjY9ziNrs2q9v2tLcKram2qg45mqe_6zFCbKt-cF61359×680
If you got to the end

Hey ditto that’s why I said wasting my time.

I really like this, some subclasses should definitely get more love like what’s mentioned above.
some things I’d change personally:

To sum it up, classes and subclasses should all be good at different things and different roles while being balanced and fair, without classes/subclasses being blatantly better than others. Someone should be able to play a class with a playstyle they enjoy and not suffer
because their class/subclass isn’t the best / the meta.

That’s my opinion on what should change, thanks for reading

I wouldn’t say its a waste of time brainstorming ideas for the game, even if the idea is ignored it could always be a place to come back to in the future. Also I’ve been reading those rants for the past few weeks and I wouldn’t say it was a waste of my time. I flatter you for your in depth analysis of the problem and solutions you come up with accordingly. And yes, there are a lot of things to figure out with subclasses and balancing, since its hard to balance damage and variables for different types of fighting and strategies used by players in game, also agree with the message swinem said above.

assassin is kinda wacky right now for PvE, it’s a glass cannon minus the cannon since berserker, a tankier class, deals way more damage than assassin

And sadly this will most likely never happen, and people such as my self and many others, doesn’t matter what or how much we type or talk, nothing is going to change this unbalanced part of Vesteria.

It is a waste of time, I’ve written 10s of thousands of words on how fix aspects of the game. And gets met with. NAH 100% of the time

literally the whole community about rangers. okay, we get it jeez

I post it so more than just David can see it. We all know that very little of what players say actually gets changed or implemented. And when people ask for things the opposite happens more often than not.

Ask for rangers to get nerfed? Rangers now carry a minigun instead of bows.

Ask for more information on stats/perks? Ability to even see what perks you have gets removed.

Ask for more balance just overall between subclasses? Well you know where I’m going with this.

I was annoyed that day so I decided to write a little.

The argument of “they don’t listen, so it doesn’t matter” can be pretty much used for any conversation pertaining to Vesteria at the current point in time.

All I know is Davidii is the only Dev who even tries to use the Testers to test things, while listening when we ask if we could have X thing to make testing easier.

You could have looked at #discord-servers or even a private message would be better.