Now that SQR has access to holy scrolls, the colosseum should get them as well. Marks of valor can be used for cursed attack scrolls just like eggs, so why not holy scrolls too?

If holies do get added, they better not be something crazy like 300 marks. 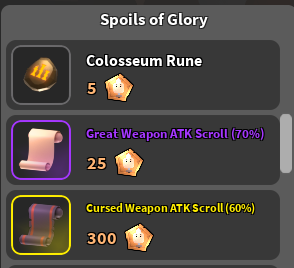 Colo prices are insanely outdated. If David is nice enough. hopefully he will change these prices too, ESPECIALLY THE COLO RUNES AND CURSED SCROLLS.

Yeah cursed scrolls should be at 75 marks minimum and 100 max.

Adding holies to the colo shop would make people who just want some easy money unable to get it (Guardians spawn there), and it would be super laggy from people farming there nonstop.

I do like the idea of adding more “universal” items to the Colosseum shop, stuff that is good for anybody regrdless of level.

I hate that Colosseum runes cost marks now… I would prefer they just be like 3-4 times the price of other runes (they cost 4S last time I played, they were down from the 15s they were).

Also, the prices for the armors are pretty fair, tbh, because of the perks they give. Most Warriors (subclassed or not) can take several of the Bandit uppercuts and be perfectly fine, meaning that the perk just means they kill the things faster. The Bloodmage Robe’s perk doesn’t really come into play much for Mages, because if they take enough damage to worry about, they’re likely as not dead already. I for one am super after the Ravager Boots and Skull Mask, those STR boosts are OP for Rangers like me.

The weapons are absolutely worthless, though. The next best for each class (SQR stuff) is so much better, and there is no bow at all. If there was a bow, I might’ve spent more time farming in the Colo. At this point, the Colosseum weapons are really just flex items. Not as much as the Aviators, but still pretty flexy.

Also, SQR is an easier farm for holies, no one would even really bother trying for the Colo holies b/c they’d be something ridiculous like 1,000 marks. Easier to get them from SQR.

colosseum should not be a necessary part of the game to play, especially since berezaa openly said he doesn’t care about pvp. giving colosseum one of the most valuable items in the game is pretty stupid, and all it takes is a sorcerer spamming meteor strike.

if it were to be added to colosseum, it should be really extremely hard to get it. you can go to the colosseum solo and end up with a ton of marks after an hour or so after nonstop ability spamming. as for mushpocalypse and sqr, you need to have a party for at least several runs, and this doesn’t include the time it takes to find a new person to fill the spot of a person who left, let alone multiple.

laughs in five alts (I am a Ranger main)

I have another problem: no one is at colo